Nameless Guard - MAY I Continue?

The plans for May regarding the Nameless Guard were simple: to paint 2 units (plague marines and terminators) and 1 war machine (land raider). That's 15 models, including one stupendous.

The problem is when you start painting after the 20th. Then you stop doing maths and switch to painting...quick painting.

Calculations will not get you this, painting will: 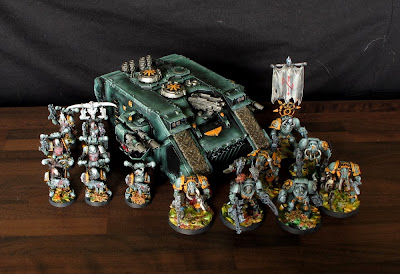 Plans for May executed in 100%. Oh yeah, it feels good. Even more when I see what I have after three months:

Last time I've asked if 2 days are enough for me to paint a whole unit of plague marines. Well, this is my response... 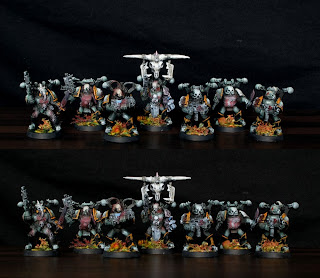 Squad Bones, made of standard plague marines box. The models are interesting and unique enough to leave them without conversions. The only additions to parts found in a box were a standard and power fist (to unify the champion with leaders of previously finished units). The power fist in fact is an arm taken from the very old obliterator model.

The unit does not have a rhino... yet.

The empty Land Raider would be a waste of transport capacity, so I'm going to fill it with this unit of 7 terminators, Squad Rust.

Painted and based as all other Nameless Guard models. Four of these were converted with parts of loyal and chaos terminators by an unknown person I bought them from. I can take credits for adding a standard to the champions backpack only, nothing else. Three remaining terminators are standard plastic miniatures.

Don't ask me for their weaponry - it's a mix of everything. 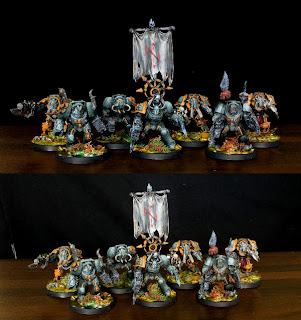 The third element to be painted this month is a unit of plague marines. Two days to paint it from the beginning to the end? I've proven already it is possible, but can it be a habit of mine?
Posted by Nameless at 9:54 AM 4 comments:

This blog is getting popular. Some people search for it specifically.

Today I had a visitor who searched for "porn+sex+warez+crack+serial+fuck+free+torrent".

That's weird.
Posted by Nameless at 9:24 AM No comments:

Email ThisBlogThis!Share to TwitterShare to FacebookShare to Pinterest
Labels: general

Why do I make plans for a whole month if I use just the last few days anyway?

The approaching deadline made me get back to my army. Land raider is ready, terminators are in progress. Now, will I have enough time for a plague marines unit I scheduled for May? 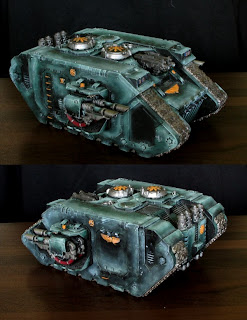 Posted by Nameless at 9:40 PM No comments:

I needed a model in 54mm representing a pirate boy. This cute little sculpt from Figone was just perfect for the job. 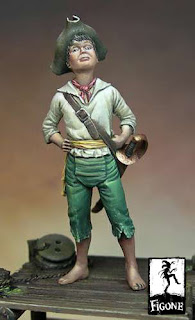 It came in a blister without any card, artwork etc. At least there was a piece of foam for protection. Minimalistic approach - all necessary elements (packaging, protection, model itself) were there, but Figone sure could  improve the presentation. 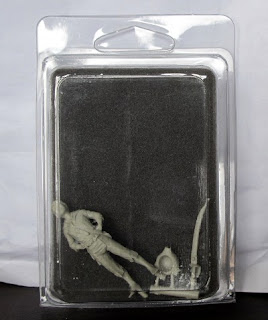 The resin cast was almost perfect with all details crisp and without defects. No mould lines in weird places, no air bubbles, no flesh to be removed. 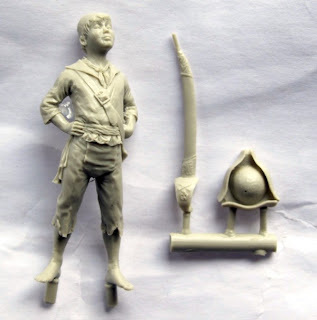 Posted by Nameless at 3:02 PM No comments:

Constance Blaize, Knight of the Prophet (PIP 31090) is a Privateer Press model from the Warmachine game (Cygnar army). 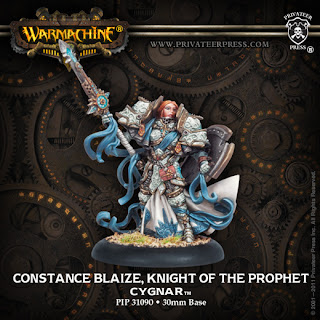 As you can see, the sculpt is very intricate. Hail to the sculptor for all the ornaments on the armour, but they will be a pain in the ass while painting...

Packaging comprises a pretty standard blister with a printed card. The miniature is protected with foam. 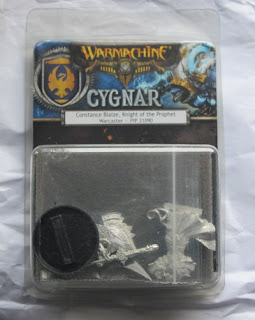 Quality of the cast is good. No troublesome mould lines, details are pretty crisp. Not the best cast I've seen maybe, but also far better than the worst. 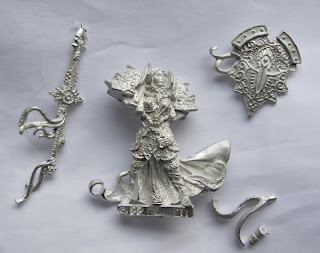 Also, there was some oxidation (or whatever happens to metal, I'm not an expert in this field) visible on the face. Unfortunately, my photo-fu was not strong enough to show it properly on the picture and it looks just like a natural shadow. Anyway, the darker place under her right chin - that's the spot.

Summarising - good product lacking few things to be assessed as excellent.
Posted by Nameless at 7:33 PM No comments:

I didn't paint much in April, but it seems that May will be a very busy month... all of these are WIP pieces, closer or farther from completion. 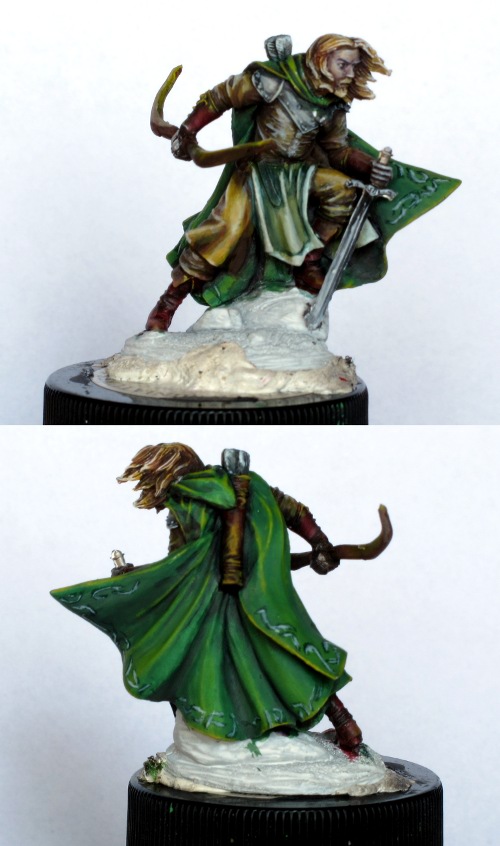 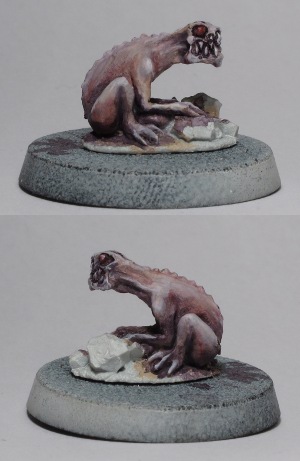 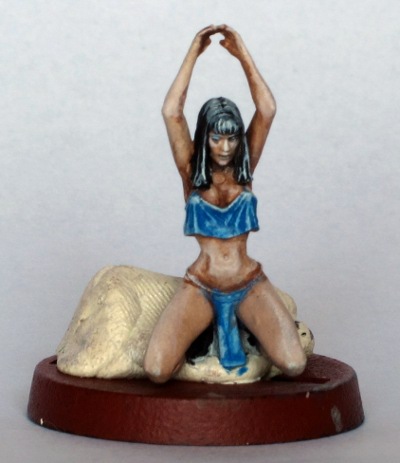 That's not all I'm painting at the moment...

Funny Mini Or Not

I have a weird tendency to comment on things I see or read... stickers on car bumpers, graffiti on buildings and so on, so forth. Not aloud, mind you, it's just my own, personal, silent, internal process.

It's nothing surprising I do the same with miniatures I see. The difference is that some time ago I decided to release these thoughts to the public. It all started with this great diorama made by Julien Casses. I posted this instead of a standard comment.

People liked it and that's how Between the Lines was created - a cartoon with photos of painted miniatures, hopefully funny, surely not ridiculing painters and/or their work.

The new episode was posted at Chest of Colors just recently. 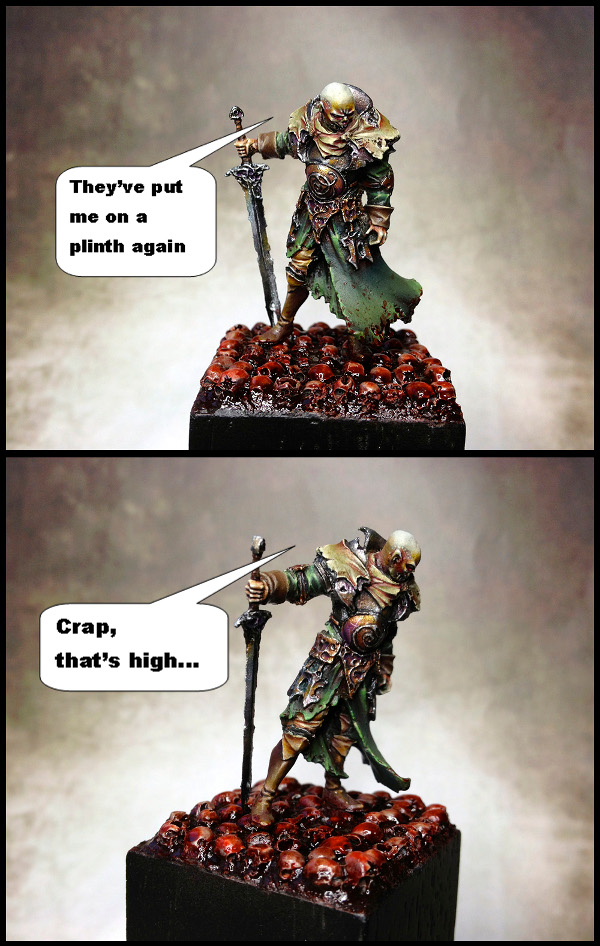 Feel free to check all episodes of Between the Lines. Who knows, maybe you'll find your own paintjob there one day...
Posted by Nameless at 3:25 PM 1 comment:

Email ThisBlogThis!Share to TwitterShare to FacebookShare to Pinterest
Labels: Between the Lines, cartoon, general, humour

Nameless Guard - Plans For May

In March I painted 2 basic units for my army, not heavy stuff (though I added 2 hellbrutes at the end of the month). In April, I painted 3 tanks, nothing elite. In May, I should be painting "Fast Strike" models... which I of course don't have.

I still don't care about that. Plan is simple. Get a painted army! I'm going to stick to that.

The first unit for May are Terminators. 7 of them, of course. Four black ones are built of both good and bad space marines. Conversions are not mine, I've only added a standard for a boss. Three remaining models are plastic chaos terminators, no conversions.

Terminators will have their own transport vehicle. Land Raider will be the biggest model in the army, at least at this stage.

Finally, another plague marines unit. This time it is a unit "straight from a box". No conversions here, with the exception of a boss, who got a standard and power fist (old obliterator arm).

That's it. Keep your fingers crossed. If I paint all this, I think I will see a light at the end of a tunnel. As of now, I'm still unsure if I'm able to finish this army in 5 months.